The eastbound lanes of Thomas Drive (i.e., the southern half of the four-lane roadway) are closed (as of Friday, Feb. 7) between Silver Avenue (near “the curve” on Thomas Drive) and the Biltmore Drive intersection. Two-way traffic (i.e., one lane in each direction) is being maintained on the northern half of the roadway. Traffic is expected to continue in this configuration for several weeks. The speed limit in the work zone is reduced to 25 mph.

The westbound lanes (northern half of the roadway) have been milled and resurfaced between Silver Avenue and Biltmore Drive. When paving was completed a traffic shift was implemented to allow work to begin on the eastbound lanes (southern half of the roadway). The week of Feb. 10, crews began milling the eastbound lanes to a depth of approximately 11-inches. Soil stabilization also began along with grading the work zone to a final template. When these activities conclude the contractor will place eight-inches of lime rock base prior to paving.

The first lift of asphalt is applied to the northern half of Thomas Drive (westbound lanes)   between Silver Avenue and Biltmore Drive. Two-way traffic was subsequently shifted to these lanes so that milling and resurfacing work could begin for the southern half of the roadway (eastbound lanes). Crews are also removing and replacing damaged concrete drainage pipes and other structures beneath the roadway. The $8.1 million project will mill and resurface Thomas Drive between Bristol Street and Joan Avenue. Work is estimated for completion this summer. 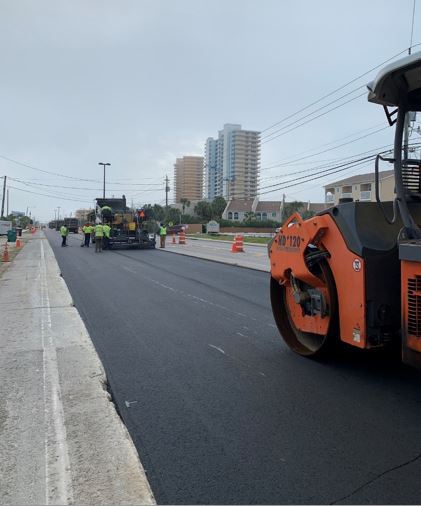