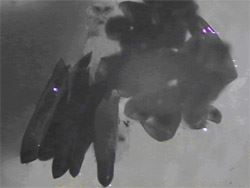 Mosquito larvae, commonly called "wigglers" or "wrigglers," must live in water from 7 to 14 days depending on water temperature. Larvae must come to the surface at frequent intervals to obtain oxygen through a breathing tube called a siphon. The larva eats algae and small organisms which live in the water.

During growth, the larva molts (sheds its skin) four times. The stages between molts are called instars. At the 4th instar, the larva reaches a length of almost 1/2 inch. 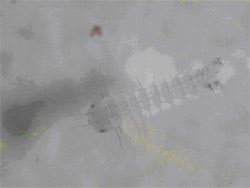 Molting Into a Pupa

When the 4th instar larva molts it becomes a pupa.

Note: Anopheles are unlike Culex and Aedes larvae since they do not have a breathing tube. They must lie parallel to the water surface in order to get a supply of oxygen through a breathing opening.