On February 12, 1913, representatives from five towns on the bay, met at Panama City for the purpose of selecting a name for the proposed new County. After discussion the name Bay was selected as one which would be satisfactory to the majority of the citizens, and as being distinctive of the territory that would be included. On July 1, 1913, Bay County was created by the Legislature from portions of Washington, Calhoun and Walton counties. The Nativity of Bay County was fittingly honored by a celebration in the City Park, now known as McKenzie Park. Picnic baskets were brought by the attendees while barbecued meats furnished by the City were served to all. Additional attractions were music, boat races, baseball and swimming matches.

The newly selected legislators held their first meeting on Monday, July 10, 1913, in rooms secured over the Bank of Panama City. The session was informal, but later in the day the commissioners met in the Owl's Nest on the dock at the end of Harrison Avenue and began strenuous work. Immediate plans were made for construction of a Courthouse, the corner stone was laid in December, 1914 and the building dedicated in December, 1915. On December 20, 1920, the Courthouse was severely damaged by fire and lost the beautiful dome that supported four clocks. However, the outer walls survived, the building was reconstructed and continues to serve as the Bay County Courthouse to this date. 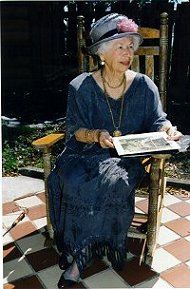 Mrs. Margaret Savage relates stories of her childhood of growing up in "Loch Lomond" lodge in the now State Park of Camp Helen. During her 1997 visit after the State had acquired the property Margaret, now 77, sat in what was once her mother's private patio and shared her memories of life in early Bay County.

The following are the Honorable Commissioners that have served Bay County since its inauguration on July 1, 1913: